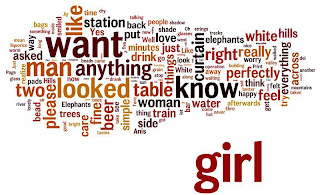 At the end of one of the units in the coursebook, we did an activity the book brings to practise using future in the past forms within a past narrative.The activity was called “White Elephants”. It involved reading about some famous white elephants (things that are useless or no longer needed but which have cost a lot of money) and making sentences using future in the past. The following book unit introduced similes.

It was then that I remembered Ernest Hemingway’s short story, “Hills like White Elephants”. As we had not done any extensive reading, I thought this was a wonderful opportunity to enjoy a work of literature.

I asked my students to read the short story and then we talked about it in class. We discussed the title, the setting, the themes and the symbols in it. Some of the students were amazed to discover the couple in the story was discussing “abortion” without making it explicit. We also noticed that the story is heavily dependent on dialogue and, thus can be easily adapted into a play.

At this point, I invited my students to stage the story. However, as learning lines by heart might have discouraged them, I suggested reading lines.
We talked about reader’s theatre and they agreed to adapt the story, perform it as a play and film it.

We distributed roles:
Characters (three)
The American: Fernando Diez
The waitress: Gala Casares Albarracín
Jig: Lucila Sanguedolce
Narrator: Regina Silvano
Sound operator (he mixed sounds of bars and trains): Juan Perpiñá
Props person (he brought glasses and bottles): Francisco Grasso
Camera operator (she filmed the performance): Ma. Belén Cristiani
Scenic designer (she made a powerpoint presentation of photos showing landscapes and important symbolic elements in the story -which was projected by means of a beamer at the back of the stage): Gala Casares Albarracín.

The performance was a success. The students were really proud of what they had been able to do. Some even joked about taking up acting!

The play was followed by an in-depth discussion in which interesting points were raised:

-how the dramatization had helped fully appreciate the story
-the number of questions the female character asks evinces her lack of confidence and her need for constant reassurance
-insight into the female character´s state of mind can be gained by looking at the landscape and other symbolic elements
-the time they spend drinking gives a clue to the nature of their relationship (they drink to fill in time)
-the characters talk, but fail to communicate with each other, which highlights the rift between the two.


Finally, we reflected on Henry Miller’s words:
“The great work must inevitably be obscure, except to the very few, to those who like the author himself are initiated into the mysteries. Communication then is secondary: it is perpetuation which is important. For this only one good reader is necessary.”